I recently noticed in Google Trends that the search volume for the term “guitar” has dropped the last few years and “guitar lessons” has steadily declined over the last six years. I was wondering if it was an indictment of the guitar. Considering that popular music features less and less recognizable guitar parts, it seemed reasonable that less and less people wanted to learn how to play the guitar.

But then today I came across this graph. It’s a look at the sales of the recorded music industry. The image itself came from a report discussing the transition of literature from books to digital format (pdf). The book industry is wondering if it will suffer the same fate. 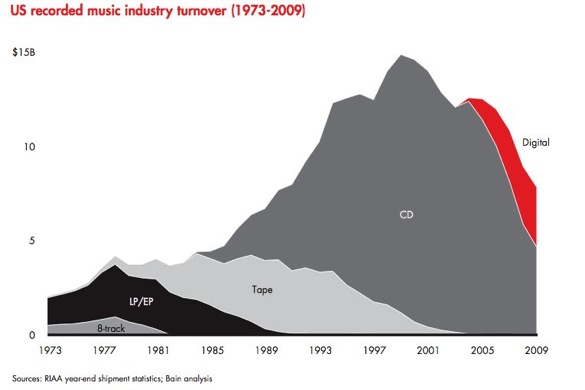 After the recorded music industry peaked in 2000 it declined for a couple years before a slight increase brought on by the arrival of the iTunes store and other digital music retailers. Then by 2009 overall sales had dropped down to roughly the same figures as 1990.

So this brings me to a few questions. Will the recorded music industry level off? Possibly in the 5-7 billion range? I think that is a level where good music would still be created and sold and what we will have lost is some of the “gift” market.

Does this explain the decline in guitar interest? Is it less about the guitar and more about music in general? It seems that all the major areas of pop culture (music, books, movies, tv, sports) are experiencing a decline right now. Technology has brought about many ways to spend one’s time. So niches take away from the larger pop culture areas that used to dominate. So is the appreciation, recording, and learning of guitar experiencing a decline down towards a base that will level off? Or will it continue to dwindle until it goes the way of the lyre?

I’m lead to believe we’re just settling in to a new base level after experiencing an extraordinary boom.

Jeremy Casey is a frustrated guitarist who copes with mediocrity by writing about guitars online. Elsewhere on the internet he writes about a variety of topics including music, sports, and more. Click here to see my other posts.