Our Guitar Guide to the United States is a map highlighting the large array of memorable guitarists, manufacturers, and other significants landmarks that have helped shape music universally. Take a look at what your state or city has produced. You can click on the map to see the full size image and read below for more information on each point of interest. 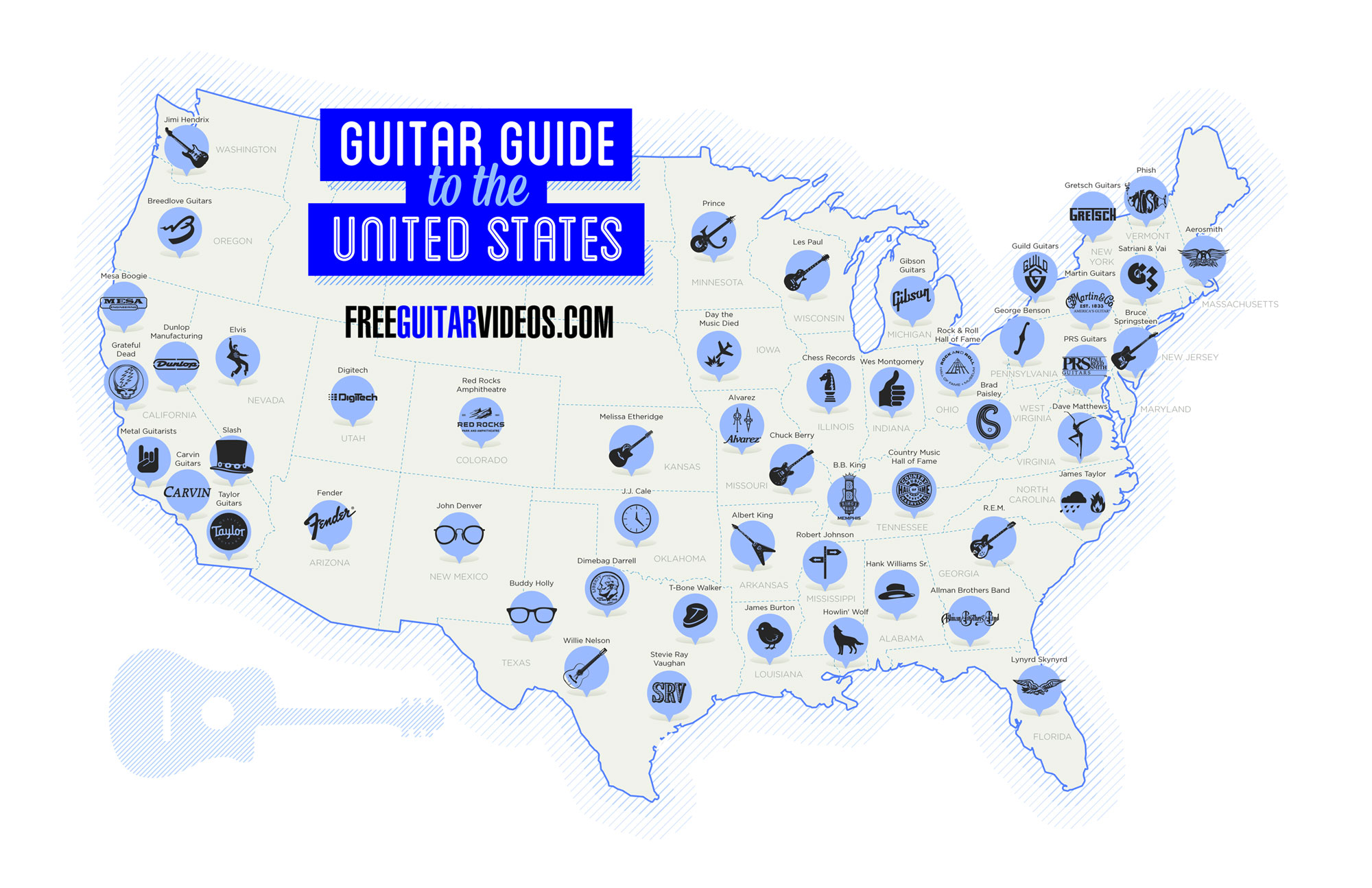 Arizona: Scottsdale is the current headquarters of the Fender Musical Instruments Corporation.

Arkansas: Albert King was raised and started performing in Arkansas before moving on and picking up his Gibson Flying V.

Colorado: Red Rocks Amphitheatre is one of the most stunning venues in the U.S. to see a rock concert.

Georgia: Macon was the home to the Allman Brothers Band and Capricorn Records. The college town of Athens produced REM’s Peter Buck and the distinctive sound of his Rickenbacker guitar.

Indiana: Jazz guitarist Wes Montgomery was born in Indianapolis and became known for the unique tone he could create by playing with his thumb.

Iowa: On February 3, 1959 a plane carrying Buddy Holly, Ritchie Valens, and the Big Bopper crashed outside of Clear Lake.

Kansas: Before she had a platinum album and a signature 12 string Ovation guitar, Melissa Etheridge was born and raised in Leavenworth.

Louisiana: The “Master of the Telecaster”, James Burton, developed his chicken pickin style in the Shreveport area as a teenager.

Maryland: Paul Reed Smith’s popular brand of guitars is based in Stevensville.

Michigan: In 1902, Gibson Guitars was founded in Kalamazoo.

Minnesota: Through all of his antics, Prince still manages to amaze fans with his amazing guitar work.

Mississippi: Nobody knows for sure what happened at the crossroads, but Robert Johnson definitely influenced American guitar forever. The Delta Blues produced many other legends like Howlin’ Wolf, Son House, and Elmore James.

Nevada: With his song, movie, and performances, Elvis helped establish Las Vegas as one of the United States’ entertainment capitals.

New Jersey: Rock anthems poured out of Bruce Springsteen and the Garden State.

New York: Gretsch and Guild Guitars were both started in the New York City area. Long Island greats Joe Satriani, Steve Vai, and John Petrucci have performed together as part of the G3 Tour.

Ohio: There is no shortage of famous guitars on display at the Rock and Roll Hall of Fame in Cleveland.

Oregon: Get a handcrafted Breedlove guitar from the workshop in Bend.

Pennsylvania: Nazareth houses the headquarters and factory for Martin Guitars. Jazz legends George Benson and Joe Pass were both raised in the state.

Tennessee: A trip to Nashville allows you to experience history at the Country Music Hall of Fame, Ryman Auditorium, and Music Row. Beale Street, B.B. King, and Sun Records contribute to the Memphis tradition of blues and rockabilly.

Utah: Digitech and their line of effects pedals are headquartered in Sandy.

Vermont: Trey Anastasio inspired a new generation of jam guitarists as a member of Phish

Washington: Jimi Hendrix was the first of many guitar legends who would call Seattle home.

Wisconsin: Les Paul, who was born in Waukesha, helped give birth to the electric solid-body guitar.