Fender released their Wayne Kramer Signature Strat recently. Wayne Kramer was the founder of MC5 and supposedly used the flag painted Strat on their “Kick Out the Jams” among other tracks. Unfortunately I can’t find video of him actually playing guitar, though the video below contains several pictures and Wayne discussing the guitar.

My real question though, is how many of these guitars will Fender sell? Going at $1,000 how many guitar playing hard core MC5 fans are out there who are looking to add another guitar? Or will this guitar sell based on it’s American flag artwork to people who don’t know who Kramer or the MC5 are? It certainly possible. A friend’s wife once sent me an email trying to track down a guitar as a gift. Her husband had always wanted a flying v guitar with an American flag on it. I finally figured out it was the Dave Mustaine “Jackson Y2KV Flag” model. And I happen to know the guy isn’t a huge Megadeth fan.

Would you buy this guitar? Or more to the point, would you buy a replica of one of your favorite guitarist’s guitars? 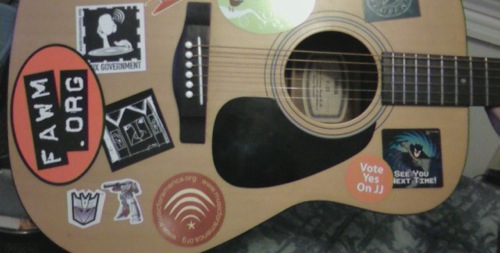 Fender has a helpful post up on how to remove stickers from your guitar or case.

Probably the best way to remove stickers from a guitar without harming the finish—residue and all—is to use naphtha, which works well on all finish types, including nitrocellulose lacquer. The term “naphtha” actually refers to several rather volatile liquid hydrocarbon mixtures. Common products made with it include lighter fluid for wick-type lighters such as Zippo lighters, shoe polish, various cleaning fluids and solvents, and fuel for portable stoves and lanterns (camping gear, mostly).

photo by: Josh Writes a Blog