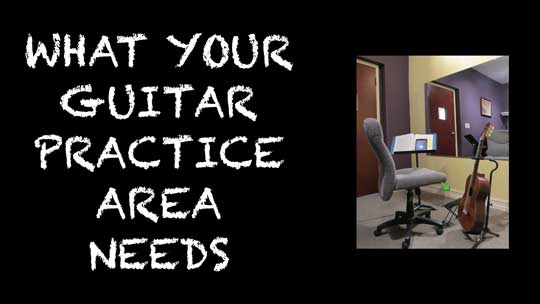 Creating a Guitar Practice Station will accomplish two main goals. First, you’ll be able to key in on exactly what you need to be working on. It may be a specific piece of music or a technique. But if you have that information in front of you and are not looking at the tv, you have a better chance at success.

The second goal of a a practice station is to get you in a proper and comfortable playing position. Get a chair that’s conducive to playing guitar and add foot pedals as necessary. Also, having a guitar stand nearby will allow you to take short breaks when your hands or mind become overwhelmed. Clear your head, re-energize, and then get back to work.

Regular focused practice is the best way to actually improve at guitar. Watch our quick video for more tips on setting up your practice room.

Are you looking for a way to practice your electric guitar on the road without having to lug an amp and effects pedals around? The iRig by AmpliTube ($39.99) allows you to plug your electric guitar directly into your iPhone. You can also run a separate jack to a pair of headphones so that you can practice quietly in a hotel room. Plug into some speakers or a mixer for a more portable effects setup. With their free AmpliTube app you can add the sound of three different stomp boxes and a guitar amp and cabinet. The LE version and Full version offer even more settings.

The Guitar Habits site has a post on adding some Zen meditation principles to your guitar practice routine.

“Guitar practice is in itself a form of meditation. You need to stay focused on what you practice and not let your mind wander. It is about concentrating on your fingers, your technique, letting go off tension, recapturing yourself, letting it happen, continually shaping and getting back to the essence of your practice.”

If you live with family or have roommates then you have also been interrupted during the middle of a practice session. Here is some advice:

The best way to practice is in solitude. Tell your family when and for how long you are going to practice. Ask them to give you some privacy for the time being. Find yourself a room in the house where you can have some peace and quiet. Create your own sacred hide out where you can play your instrument, where you can practice without distractions (turn off all electronic devices) and work on becoming a better guitar player or songwriter.

– Over at guitarforums.com there is a discussion over whether you should practice sitting down or standing up. Like many of these questions, the answer depends on your goals as a guitarist. If you intend to play live a lot, it would probably serve you well to also have frequent practice playing your guitar in the standing position. For more tips, our own Peter Vogl has free videos on the seated guitar position and standing position

– Trying to decide between the real deal and a knock off? Take a look at this post on Gibson Les Pauls vs. a copy. Take a look especially at dspellman’s comments:

IMHO, Gibson doesn’t start making a really good Les Paul type guitar until you get to the $3000 mark. Even at that price point, there are guitars that are far less expensive that easily compete with Gibsons in terms of playability and build quality.

At the low end, Rondo Music’s Agile AL3000 series (AL3XXX, actually, since there are 3000M and 3100’s) are real contenders, and normally run about $389 – $599 (if you want a 3/4″ solid maple top). The pickups in these are Alnico V’s that actually sound and respond very much like Gibson’s ’57’s. The controls in these are serviceable, but it would certainly be cheap to shake these out and replace them with the best availalbe. But these guitars come with multi-layer binding around the body and headstock, single-layer binding on the fretboard. They have ebony fretboards and real abalone inlays. The fretboards have a 13.7″ radius (Gibsons are 12″, the frets are hand-dressed, the necks are a bit thinner than Gibson’s ’60 series (you can also get necks that are wider and thinner) and very comfortable. The bodies are SOLID mahogany (I think there’s one series that has chambered bodies available) and the result is a guitar that measures up very well against what Gibson tosses out there in the sub-$3000 range.

– And finally we have a thread debating Rosewood vs. Maple fretboards. Two arguments come into play. Does the type of wood that the fretboard is made from make a difference? And if it does what are the differences.

Thanks to the IG Blog we came across this post by Dave Jacoby. It’s Chapter 2 in his series on how to not suck at guitar. The basic idea is to occasionally pick out a popular tune and try to figure out how to play that tune on the guitar. It’s easy to fall into a habit of only practicing technique and speed and forgetting about understanding the guitar. It’s certainly quicker to do a google search and pull up the tab for a favorite song. And there’s nothing wrong with that, but some of my favorite practice sessions have been either intentionally or semi-accidentally figuring out how to play a song. Dave suggested Happy Birthday, the IG Blog went with the 007 Theme and then recorded it. Try your own. I like the theme song idea. How about the Jeopardy theme?